The Toronto (sometimes stylized as TORONTO) is a mining ship from Earth owned by DDT, sent to Albion to mine its large raw mineral supplies. The construction of the spacecraft costed DDT over 120 billion credits, investing 3 years worth of profits.

The ship consists of 8 segments which rotate in space to create artificial gravity, but unfold when landed, hence its specification as Daisy-class.

Only 2 of the 8 segments have life-support systems. The rest contains mining supplies. During the landing sequence, the segments are unfolded like a flower, landing on the ground.

The most notable technology on the Toronto is its AI, Ned, which took up about a quarter of the ship's costs. Ned controls all systems on the ship. Ned's mind is stored in the Central Computer which is housed in a wireless super-durable box.

The fusion reactor on the Toronto is the most effective power source known to humanity. Inside the reactor, a fusion reaction goes on, which produces immense amounts of energy.

The Toronto is designed to land on Nugget. Its systems will mine enough ore for further production of robot systems and will result in a self-sustaining process. As the ship mines more and more minerals, its structures automatically can expand their sections and grow in gigantic size.

The ore produced by the facility will be sent to Earth in cheap containers. At the end the whole unit will be melted down and blasted to Earth.

The gravity on the ship is simulated via the centrifugal force caused by the ship's rotation.

Thanks to the AI control, only 80 crew members are necessary to control the ship.

Floating above the Albion.

Emerging from the hyperspace.

Combat in the Toronto.

Landed on the Umajo desert. 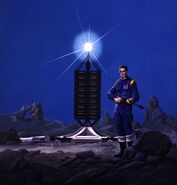 On the back CD cover.

Service deck under it.

Service deck between the sick bay and the reactor hall. 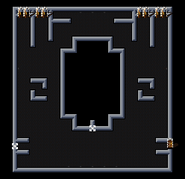 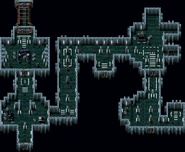 Service deck to the reactor hall. 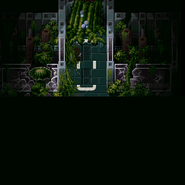