The shrine of Srimalinar is a sacred place to the Iskai who live in the village. It can be found south from Srimalinar. There is a plenty of metals and minerals beneath the shrine, discovered by Kontos, who sought to defeat the Iskai and mine the valuable resources. The cellar looks remarkably different to the top part, and it is there where the Iskai hold their ceremonies, and their dead ones rest.

The Iskai from Srimalinar believe that the consciousness of all of them that were fair and good in their lives finds its eternal peace there. Strangers are forbidden from entering the shrine by a taboo, as they could destroy the eternal consciousness. 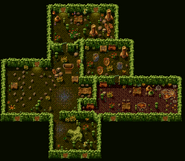 The lower section.
Community content is available under CC-BY-SA unless otherwise noted.
Advertisement