Animebona (The word means "flow of souls"), daughter of the Unknown God, known as the Goddess by the Iskai or Danu by the Celts, is the Entity of Albion. It was she who led Canto and others from Earth, through the Land of the Fog, to Albion. She is the consciousness that contains all living beings on Albion. Animenkna is her younger brother.

Iskai believe the Goddess is the Great Consciousness formed by all the spirits of the departed. Most of them believe that after death they will return there; and the more exemplary one's life is, the more of his consciousness will remain when incorporated into the Goddess.

Albion is considered the body of the Goddess and it is a crime to burrow into the land for stones or metal. 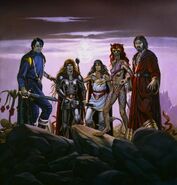 Animebona watches Tom and the others on their journey.
Community content is available under CC-BY-SA unless otherwise noted.
Advertisement